Hello! I'm going to write this post in english, because I spent last month doing an internship in Ireland, and I want them to be able to read this post as well :) (And everyone else who doesn't understand finnish but understands english) So, I did my internship in a very lovely place called "Eden Farmed Animal Sanctuary" in Ireland. I was very lucky to secure an Internship at Eden. I had to complete an application form, supply references and do an interview. Sandra Higgins, the Founder & Director of Eden, was absolutely clear with my course tutors that the work of Eden seeks to abolish all animal use and offers internships in animal rights, not animal welfare.

Eden is a place where rescued farmed animals are given a home for life and where they are treated with compassion, dignity and respect. Eden was the first vegan sanctuary to open in Ireland in 2008. It was also the first sanctuary dedicated to the care of animals rescued from human use in animal agriculture. The concept of Sanctuary was not well known in Ireland prior to Eden. Eden has a strictly abolitionist philosophy.

The residents of Eden have many different backgrounds, but most of them have been used by humans and are rescued from a certain death. Even though they are rescued and are given a chance to live their lives free from exploitation, they still suffer from illnesses that are caused by their past and a long time of purposeful breeding. Its Director, Sandra Higgins, is one of the few sanctuary directors who gives the world a glimpse into the truth of life for the animals we use as food. Sandra always reminds the world that this suffering cannot be alleviated by sanctuaries; it can only be prevented by people going vegan.

Egg-laying hens, for example, are bred to lay way more eggs than they would naturally lay. The red junglefowl is one of the wild ancestors of a domestic chicken and they only lay around 8 to 11 eggs a year, when a domesticated hen nowadays can lay more than 300 eggs a year. That leads to many different illnesses and reduces their lifespan from 20 years (or even 30 years according to some sources) to not much than 3 or 4 years. In the egg industry (organic, free range and back yard) male chicks are killed right after hatching, and egg-layering hens are killed around 12-14 months of age when their egg production begins to decrease.

Below is a picture that illustrates the vegan ethos that permeates life at Eden. At Eden eggs are regarded as the property of the hens who lay them and they are given the opportunity to eat them if they wish. Some of the hens are able to crack open their own eggs. In the photo below we see Miriam and her friends, enjoying an egg that belongs to them. By eating their own eggs they get many of the nutrients and vitamins back which they lose when laying an egg. 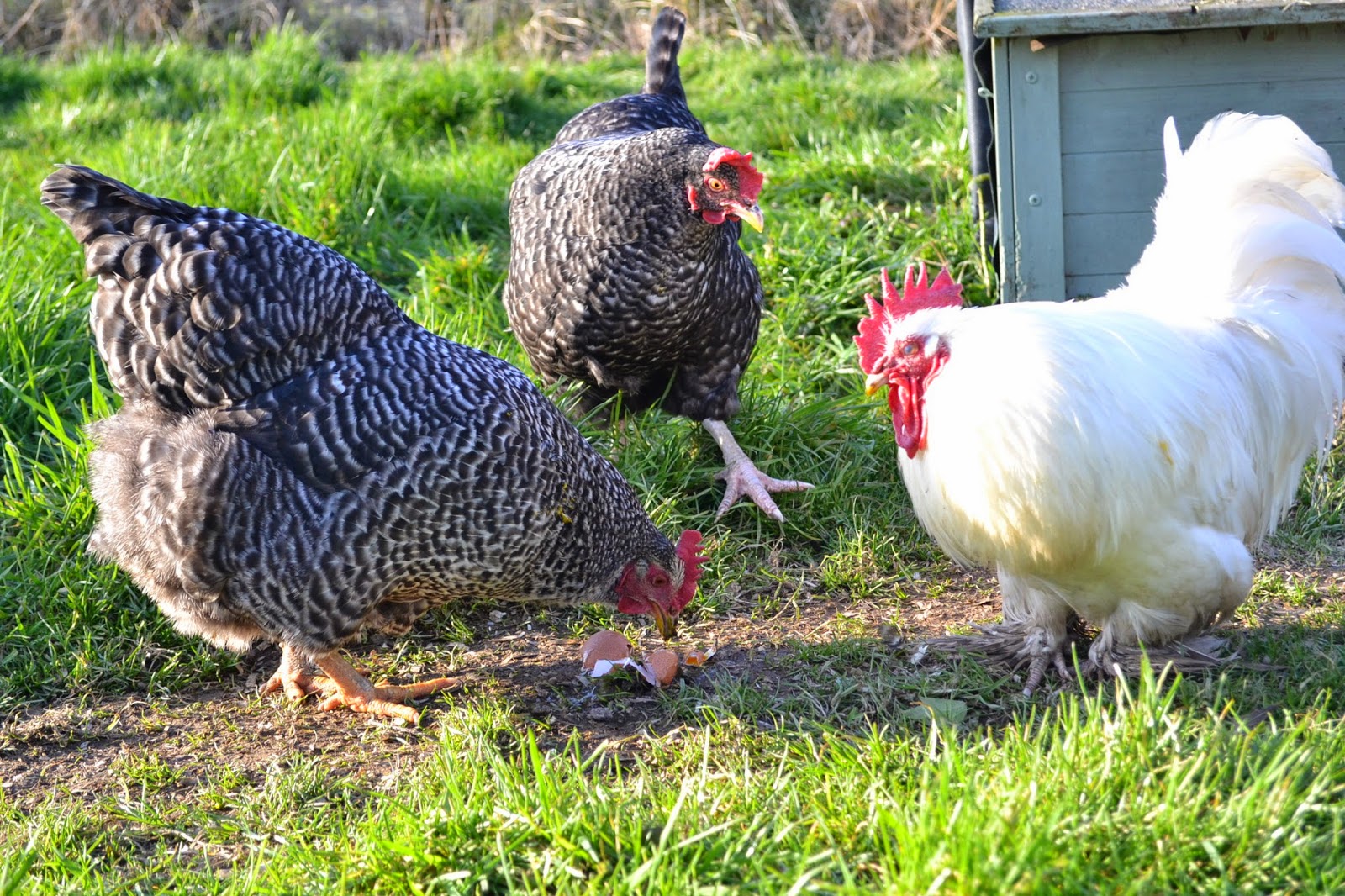 Sandra helped me to distinguish between chickens who are well and those who might be ill by comparing their behaviour and posture. Sick chickens stand still a lot instead of being busy eating and pecking around. Sandra also helped me to notice how their walk might indicate illness. For example, one day Miriam was running a little awkwardly. Sandra examined her and discovered a swollen abdomen. This indicates the possibility of a tumor and/or Ascites (a build up of fluid in the abdomen that can be caused by infection, cancer, liver or heart disease). We took Miriam indoors and I helped Sandra to drain the fluid by holding Miriam still. Sandra used antiseptic solution on Miriam's skin before inserting a needle and syringe into the abdomen. We drained 500mls of fluid. Miriam was then kept indoors overnight with food, water, and treated with broad spectrum antibiotic and meloxicomas adviced by vet.

The Director and Founder of Eden and my on-the-job-trainer, Sandra Higgins, told me that she's been dealing with these kinds of illnesses in hens for many years and that they are very common and afflict up to 96% of egg-laying hens. Although I knew that they suffer from many different illnesses, it was quite shocking to really witness their suffering. 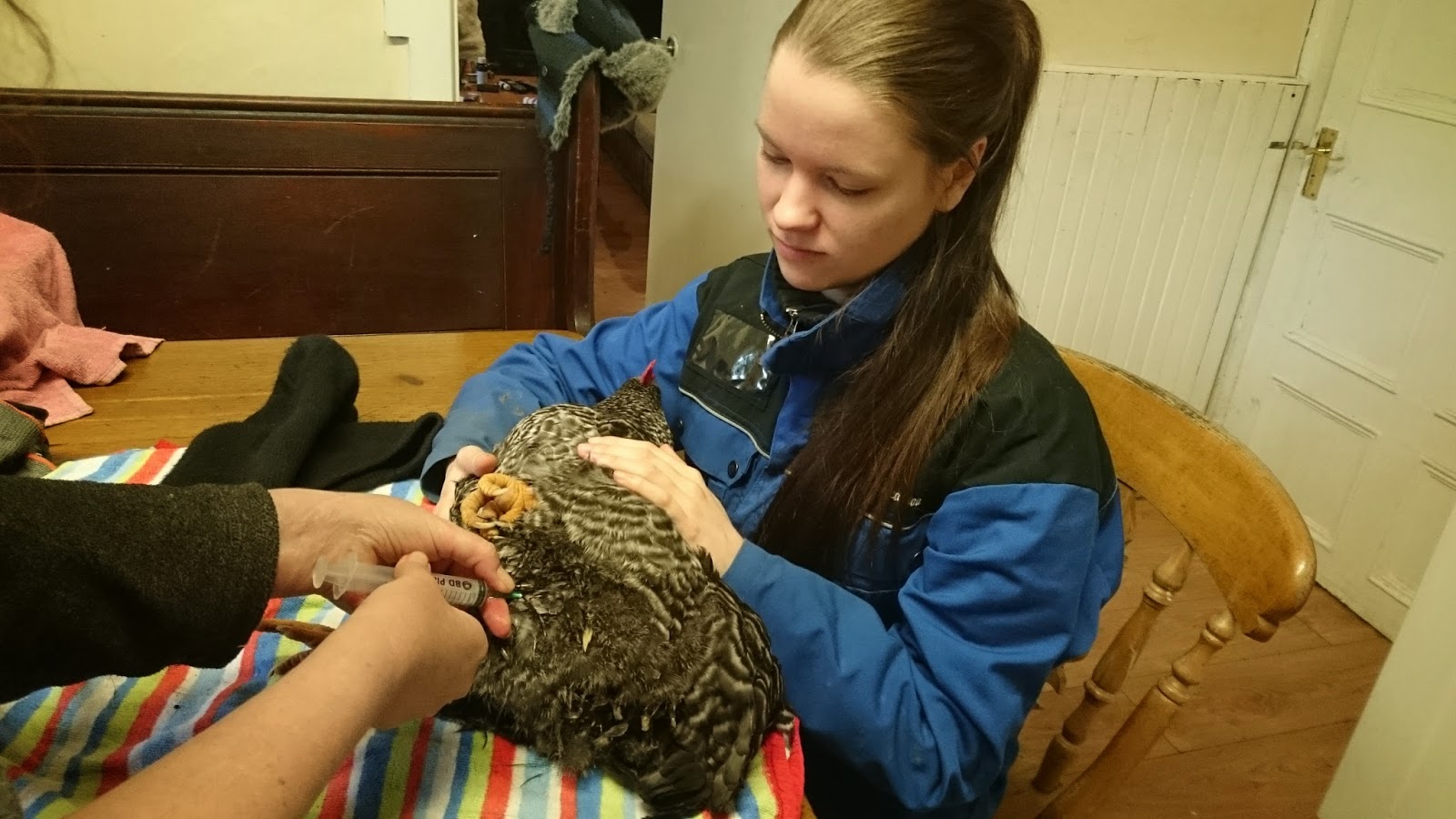 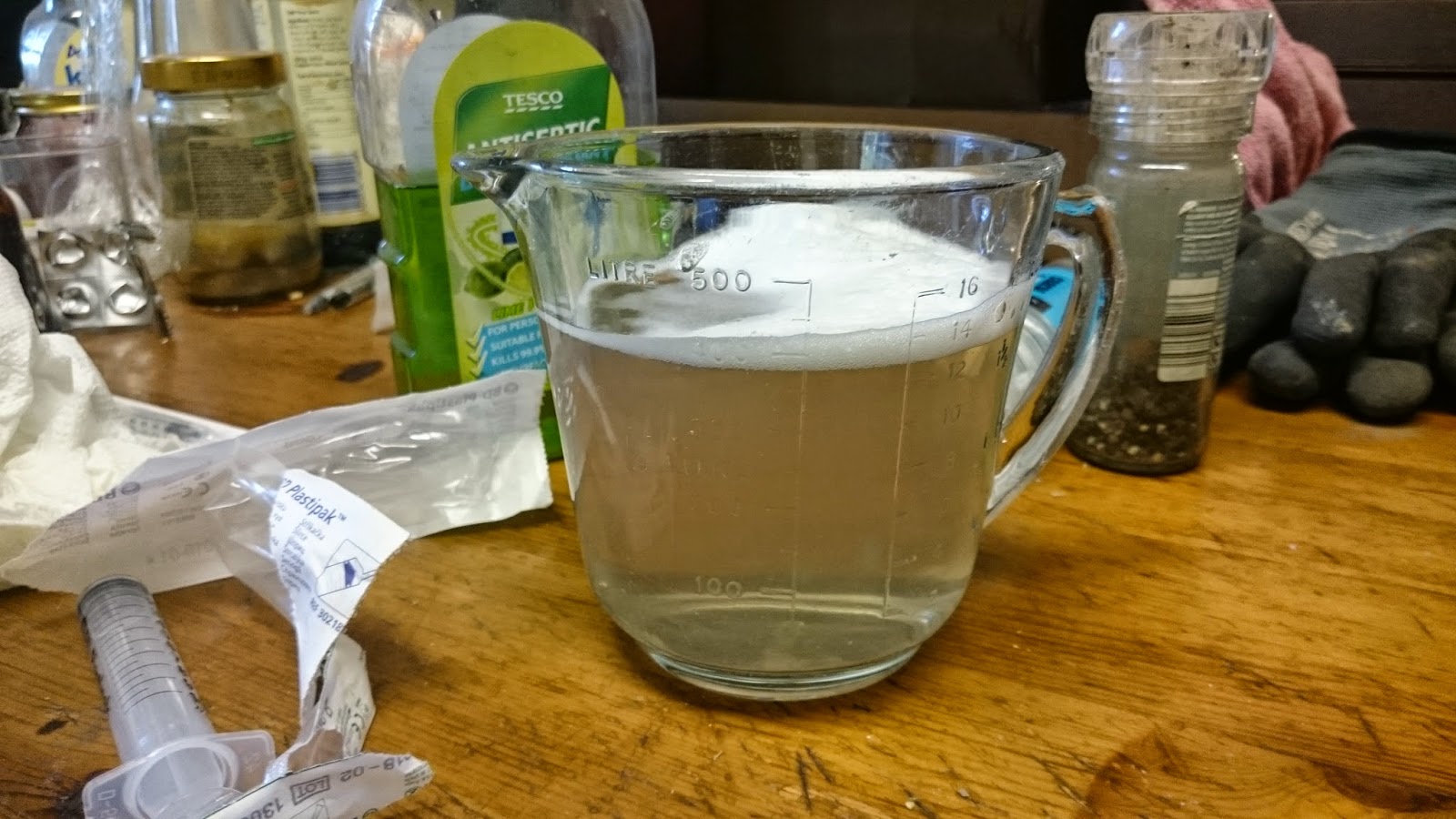 Even though they are prisoners of their own bodies, they have the freedom to live their lives as naturally as possible. They are free to choose when, where and with whom they eat, sleep or hang out during the day. They are all individuals and they have different interests, likes and dislikes, just as humans do. When they are used by humans for food they are not free to do things they like or avoid things they don't like, but when they are given a chance to choose, they will.

It was really amazing to see all the different personalities at Eden. For example, here is Genevieve: 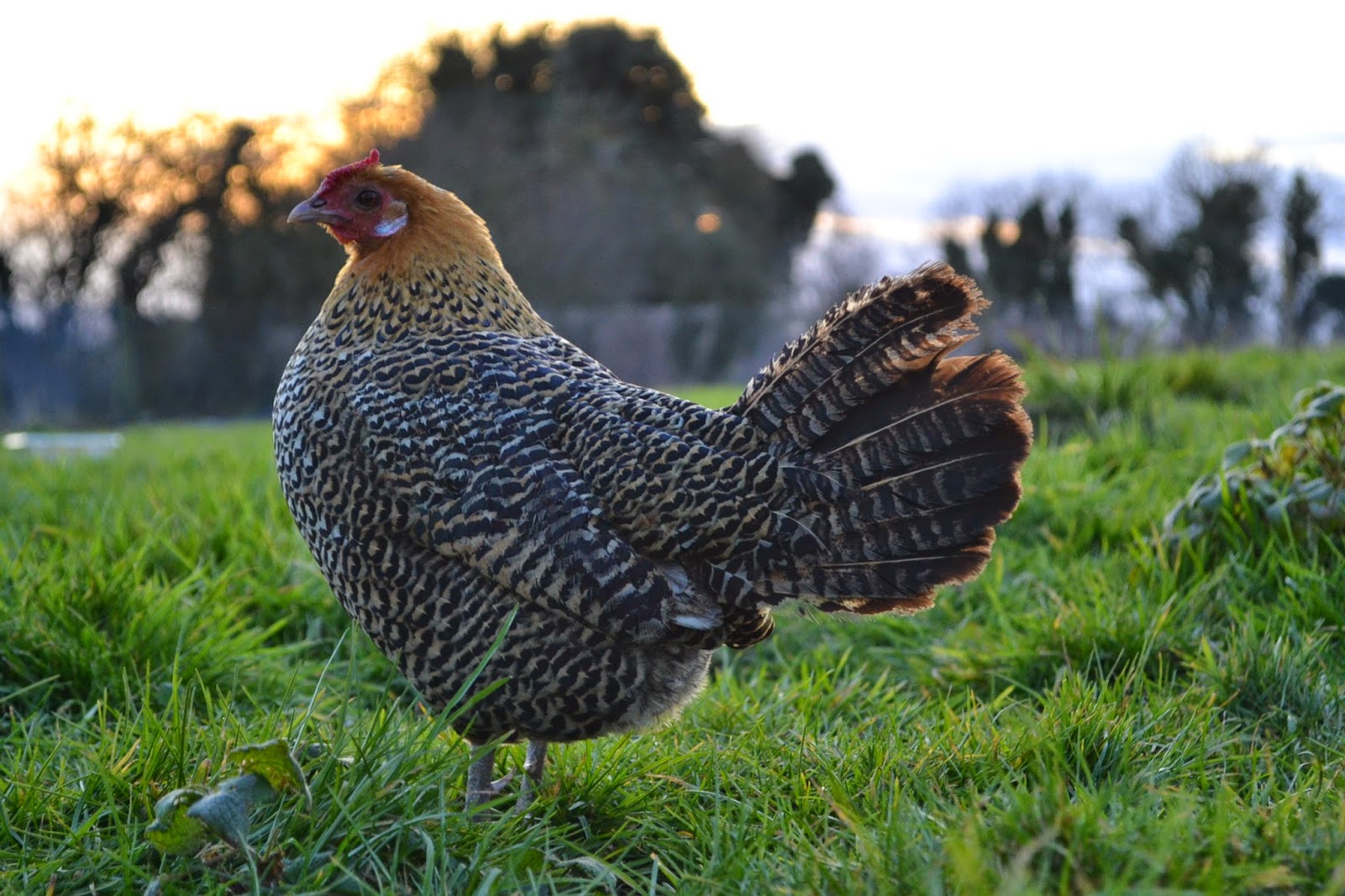 Genevieve has a wild nature. Every evening as the sun begins to set, she flies away from the sanctuary, over the gates, to a tree nearby and she sleeps there all night! In the morning when the sun rises again, she flies back to wait for breakfast. Well, some mornings she likes to sleep late, and she flies down only when we come to open the feeders. Sometimes she chooses to sleep in a chicken house with her friends.


Besides their wild nature, chickens can also be very social and curious little creatures. They would sometimes follow me everywhere. In the mornings when I went to clean their houses, I broke their eggs for them to eat. When they saw the egg in my hand they started to jump and flap their wings in excitement, like small children or dogs waiting for their treat.


One evening I got a chance to be in a chicken rescue. This beautiful little chicken was used for her eggs in a backyard farming situation. She and her friends got attacked by a fox twice, and she's the only one who survived because she flew to a tree to safety. She must be really traumatized seeing her friends die. It is irresponsible for people to have chickens and leave them unprotected from foxes.


Sandra named her Clarissa, after Clara, one of the past volunteer at Eden. She is now friends with Alex, who lost her girl Flo to an illness. (Flo is still recovering indoors) 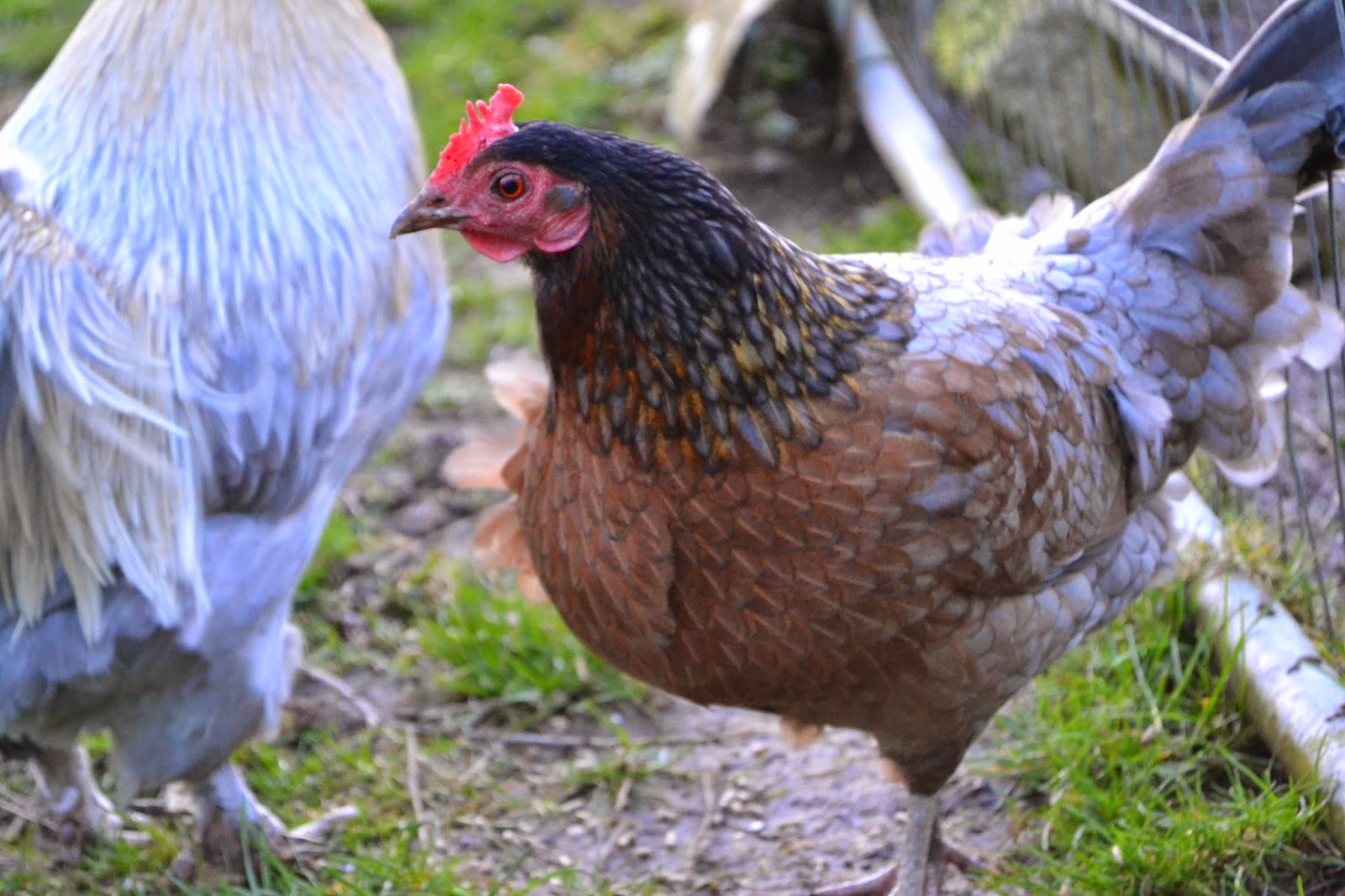 The main area of the sanctuary is a home for a few chickens, ducks, one turkey called Meghan and two geese called Heidi and Marjorie. They have a beautiful pond where they can bathe all day long, and they (especially the ducks) love it! When animals are used for food they usually never have the opportunity to swim or even see the sun, even though ducks and geese are very much adapted to live in the water. 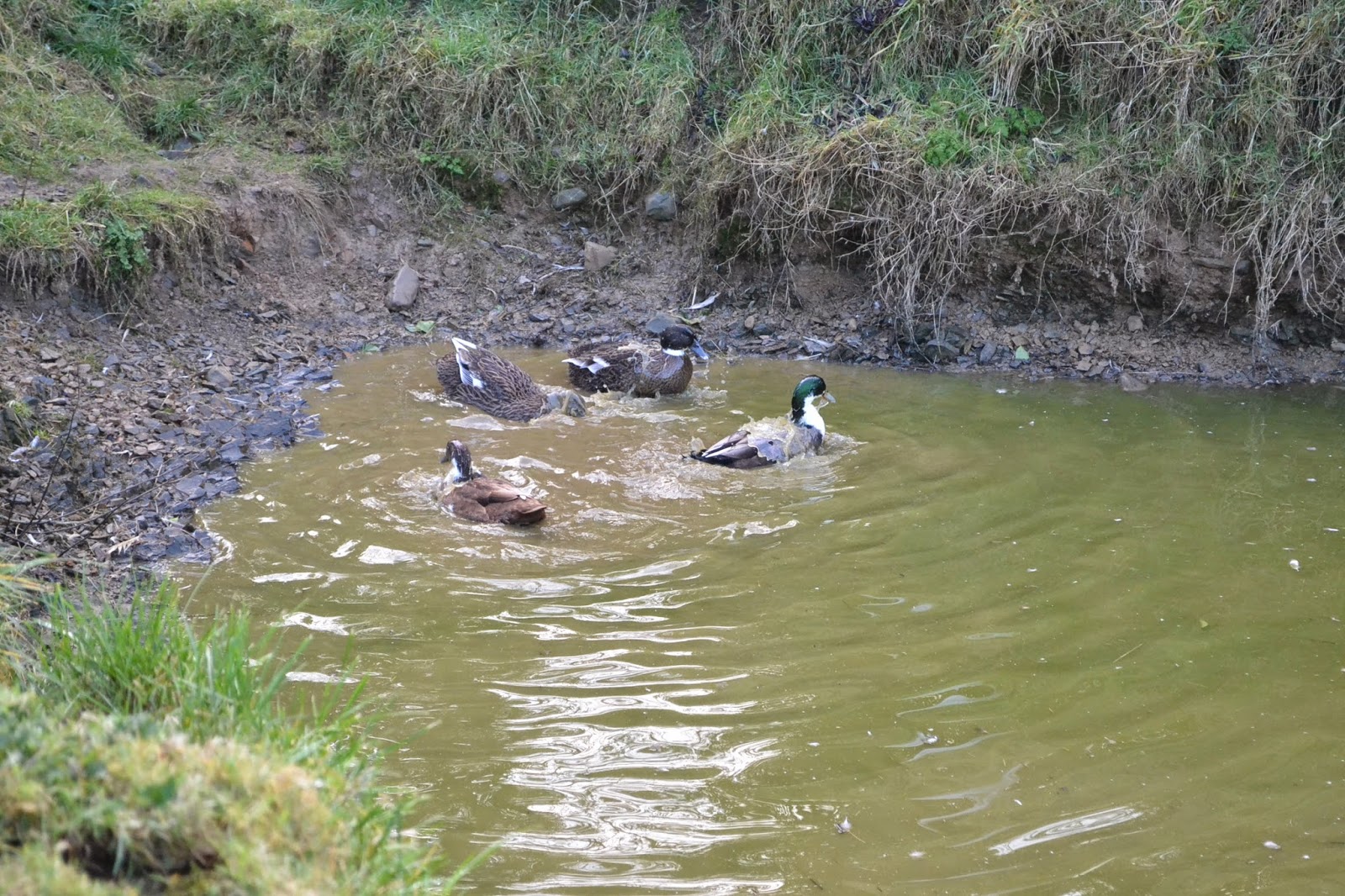 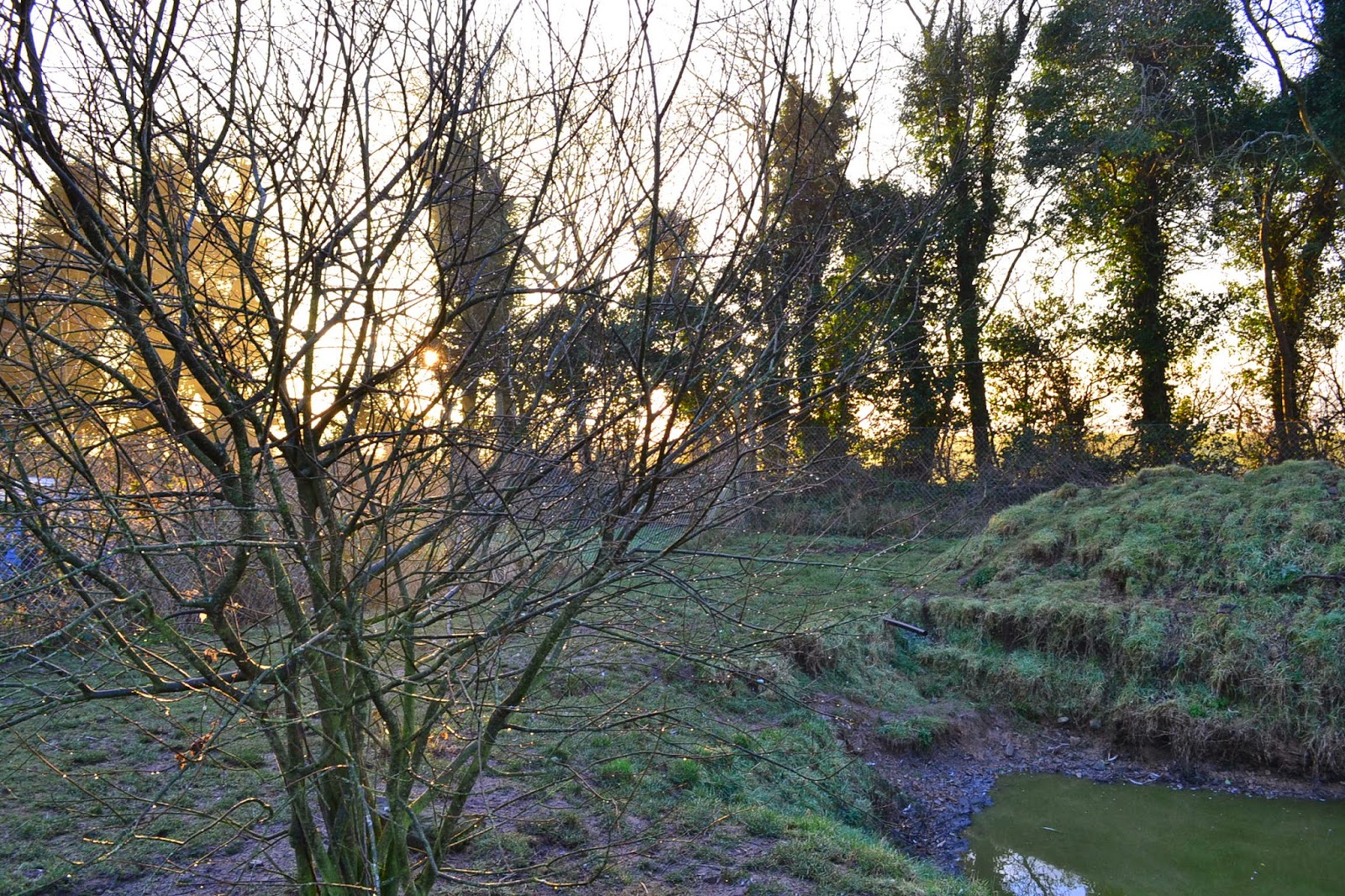 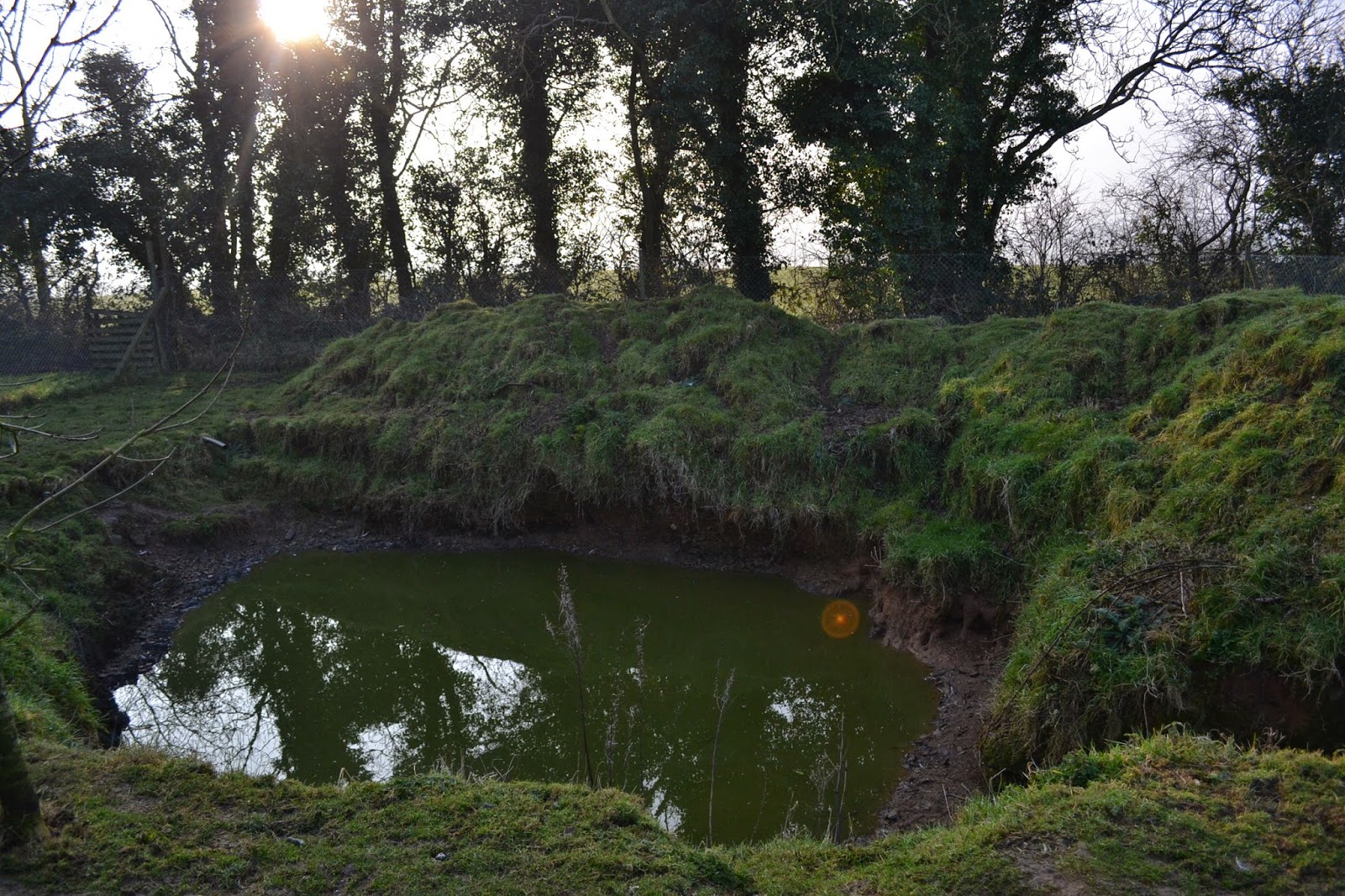 I had never met a turkey before I went to Eden, so it was exciting to meet them. I learned that they are really nice people, with different characters, and they love to get hugs. One turkey, Saoirse (Irish for liberty or freedom), likes to talk, she always has something to say. Her friends Niamh and Aoife are not that talkative, but they are very curious. They have one male friend as well, Justin.


Below is a picture of Geraldine, who is suffering from leg and foot injury. Geraldine is an Aylesbury duck, bred for both her eggs and her flesh. As a result she is a heavy bird and is prone to foot and leg injuries. She has to live in a hospital area so her leg can get better. Her friend, Gina, didn't like this, and she refused to sleep at night until we let her into the hospital to Geraldine. Their friend Ed is very disappointed that he can’t join them. When the fence blew down in the snowstorm he managed to find a way to be with them.


Unfortunately for Ed, Sandra can’t let him live with Geraldine while her leg is healing so he talks to his friends through the fence. This was one of the great examples of the things people can learn at Eden, such as how friends are just as important to other animals as they are to humans.

There's a lot of feathered people living in Eden, but there are also five sheep and a lot of cats living there. The sheep and cats don't really have limited areas, they can go where ever they like. The sheep sleep in a shed during the nights. They were rescued from slaughter and are now living their lives to the fullest in Eden! However, I also learned about how animals like sheep suffer from meeting them at Eden. For example, Pip is neutered because he is male and Eden has a no breeding policy. This leaves him prone to urinary tract problems. Cara is seven years old. She has arthritis and before I arrived at Eden she was very ill with kidney problems.

Jamie has the most beautiful character, he used to follow me everywhere.


One day I got a chance to spend an afternoon in a veterinary clinic in Ireland. I assisted in a few surgeries a little bit, took some pictures and met some nice humans and animals. This experience was not at Eden, but I did this in my freetime. I had a permission to take these photographs and to publish them. All the views that I state in this blog are completely my own, they don't represent the views of Eden. My purpose is not to criticize anyone personally, or this clinic in particular, but to tell my own opinion on the matter of  using other animals for companionship and also the veterinary practice which is a direct cause of using animals for companionship. However, I feel lucky to have had this opportunity to see a professional vet working, and I truly appreciate that they allowed me to be there. They were very nice people and I hope I'll meet them again someday when I get back in Ireland! 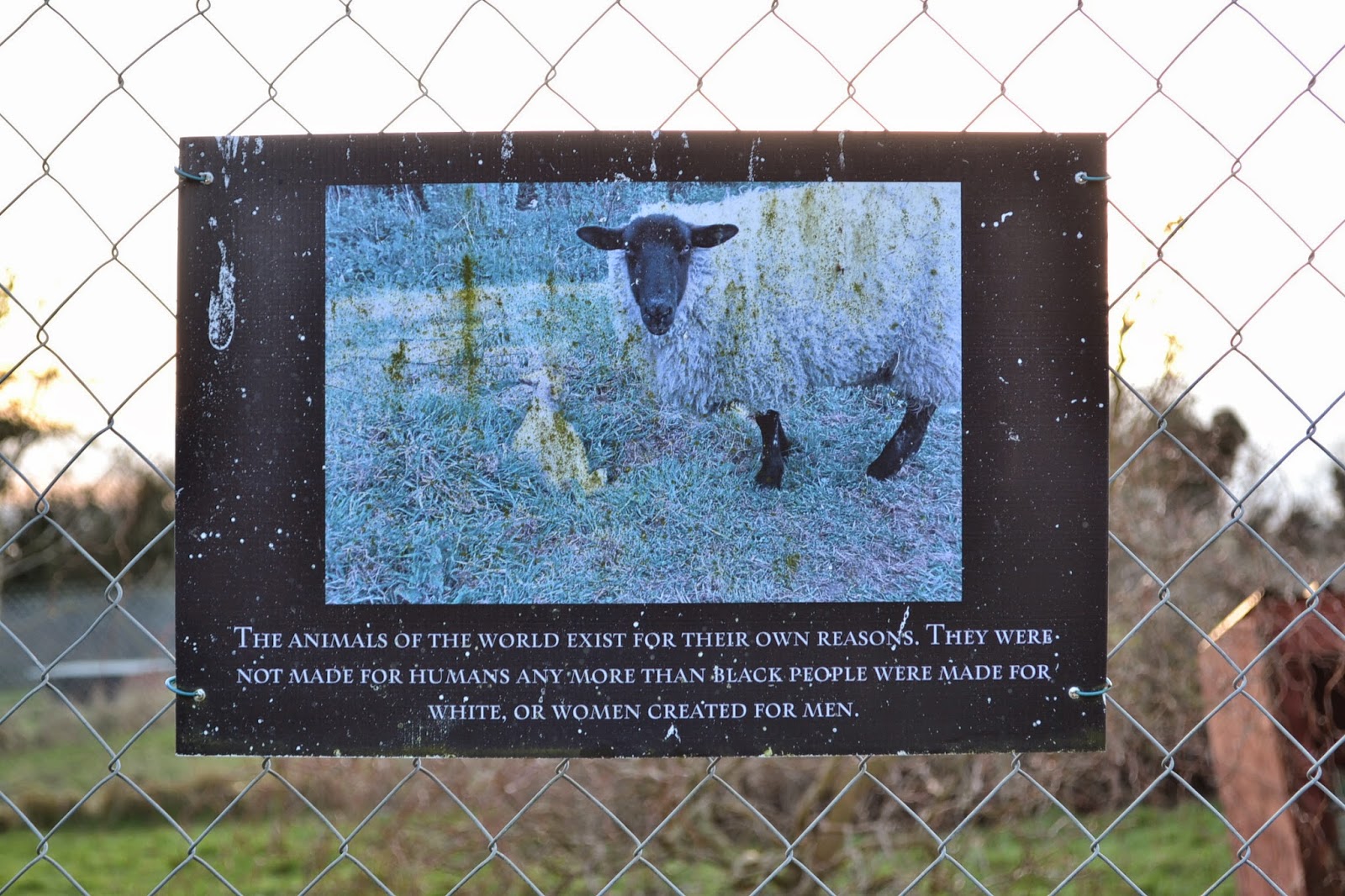 "The animals of the world exist for their own reasons. They were not made for humans any more than black people were made for white, or women created for men." -Alice Walker

Eden Farmed Animal Sanctuary has an Animal Rights & Vegan Education centre called Matilda’s Promise. Sandra gives talks and vegan education programmes at schools and colleges, and at night classes in the local towns. She also runs a free online vegan mentoring programme as well as a Clinical Compassionate Eating Programme at her Psychology Practice (http://thecompassionfoundation.org/?page_id=15). The signs in this blog are part of the Compassion for Others Walk at Eden, visual reminders that the residents here are rescued from human enslavement. If you don't want to be a part of the enslavement, torture and killing of other animals, please go vegan. If you need any help, information or advice, you can contact Eden, me or some vegan organization in your country and they will be happy to help you. You can also find a lot of information on the internet.

Thank you very much for reading my blog! Have a good day :)